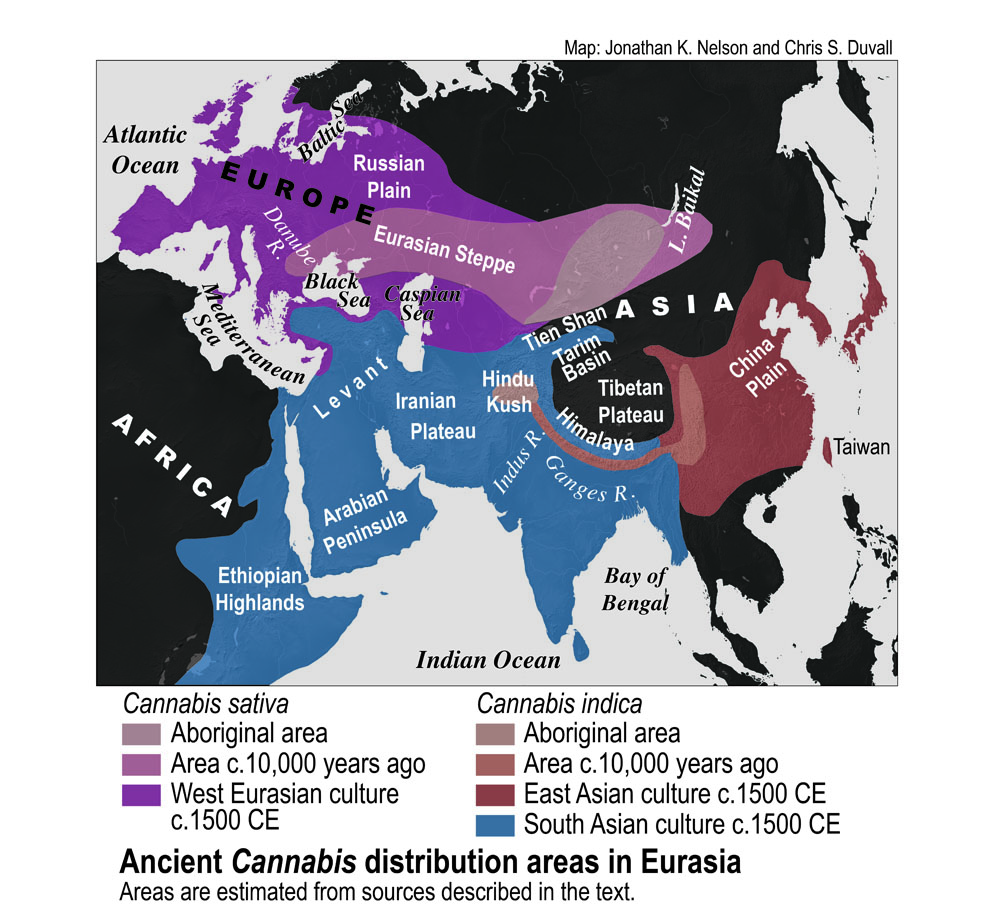 In an upcoming book, Geography & Environmental Studies Associate Professor Chris Duvall uses this map to trace the ancient distribution of two species of cannabis, cannabis sativa and cannabis indica, in Eurasia. The map also serves as the theoretical basis for his biogeography work.

“It’s subtle, because most people don’t necessarily think about species concepts as being theoretical foundations,” Duvall says. “But there are two separate populations of plants and they have two separate stories, which means we need to look at how they each traveled around the world.”

The map is from Duvall’s forthcoming book, The African Roots of Marijuana, which will be published by Duke University Press next year. In the book, Duvall chips away at myths about the plant and its early uses in Africa that still affect the way people think about cannabis today. He also looks at where cannabis, global capitalism, and the slave trade intersect.

Duvall will discuss his cannabis research on September 24 during the GES Homecoming Event at Hodgin Hall. The event is free and refreshments will be served starting at 5:30. His talk, “Geography of Cannabis,” starts at 6:30.

Cannabis has been confusing for taxonomists, he explains, and people often think there is just one plant, and therefore one story to be told.

“But there’s been a lot of research by geneticists, biologists, and botanists that shows there are these two different genetic populations,” he says. “There is the story of sativa in Europe, and the story of indica, which extends to China and Sub-Saharan Africa.”

He tells these stories within the book, but likes using visual communication as much as possible. Maps can more easily and directly communicate to readers where the two plants are found than a block of text.

This map, for example, shows how the two have traveled over time, offering a hint at the evolutionary ecology of the two different groups of plants. Viewers can bring along their knowledge of the region’s geography and history, to consider climate conditions, migration, and trade patterns. “You can see stories in there if you know a little bit about the context,” Duvall says.

Duvall had some help with this map, too, which he created with GES undergraduate student Jonathan K. Nelson. “I know other faculty hire students to make maps, and it’s cool to be involved in that thinking and designing,” he says. “There are lots of neat possibilities if you have map-making skills. So make maps!”

Duvall will discuss his cannabis research on September 24 during the GES Homecoming Event at Hodgin Hall. Refreshments will be served starting at 5:30 and his talk, “Geography of Cannabis,” starts at 6:30.
-By Laura Pasku